You’ll Feel a World Away

An amazing thing happens when you arrive at Mustang Lakes. You. Just. Slow. Down. You have to, to take it all in. The winding roads. The canopy of native oak trees. The fountains and lakes. You’ll feel a world away, yet you’re just a short drive from Hwy. 380, US 75-Central Expressway and the Dallas North Tollway. 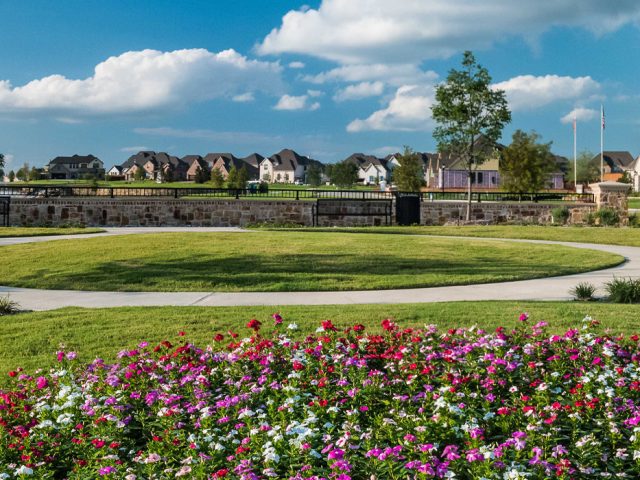 The Club at Mustang Lakes was awarded the industry’s highest honor in 2019 when it was named the Best Community Amenity by the National Association of Home Builders at The Nationals, beating out amenities from all over North America. Most importantly, it is the hub of activities for Mustang Lakes residents who enjoy the 20-acre central amenity site to work out, play, swim, play basketball or tennis, fish, or just take in the views! And that’s not all – additional amenities are planned in future phases of the community.

The Club at Mustang Lakes

The Club at Mustang Lakes is more than an amenity center –it’s like a country club in your own backyard. Instead of a golf course, we have serene lakes and expansive trails and green space for all to enjoy. The Club at Mustang Lakes – previously the Folsom family ranch home – underwent a total renovation to expand the original home to 12,000 square feet of interior space plus extensive outdoor verandas and courtyards, interior lounges, meeting rooms, party areas, kitchen, and a large fitness center overlooking the lake and resort-style pool.

An amazing thing happens when you arrive at Mustang Lakes.

You. Just. Slow. Down. You have to, to take it all in. The winding roads. The canopy of native oak trees. The fountains and lakes. You’ll feel a world away, yet you’re just a short drive from Hwy. 380, US 75-Central Expressway and the Dallas North Tollway.

East of Preston Road, the topography of the area changes from flat prairies and farm land to rolling hills, creeks and lakes. Mustang Lakes features eight lakes and a number of creeks – bordered on the west by Wilson Creek. The master plan takes advantage of this natural beauty with more than 60 acres dedicated to open areas for residents to enjoy fishing, hiking and biking along the extensive trail system.

Large mature trees were saved and are being replanted at the main entry and along the boulevard to create an impressive visual effect for the long community entry – which spans over the length of three football fields and culminates on a hill overlooking the massive Country Club-Style Amenity Center.

Get More from Your HOA

How much are the Homeowner’s Association dues at Mustang Lakes, and what do they include? Mustang Lakes will offer its residents outstanding value for their HOA dues, which includes staffing, operations and maintenance of all common areas at Mustang Lakes. This includes our 20-acre central park and 12,000 square-foot Club Mustang, complete with a fitness center, yoga & aerobics room, weight room, resident meeting rooms and lounges – plus basketball and tennis courts, swimming pools, lakes and trails. In keeping with our ‘new kind of country club’ lifestyle, Mustang Lakes will also include year-round front yard maintenance of each residential homesite in the monthly HOA dues so you can enjoy your free time and community amenities even more. This includes 40 mowings and edgings, 12 weedings and shrub trims, and 3 fertilizer applications per year. The community will be managed by Insight Association Management, which brings a track record of excellence in managing other major DFW-area masterplanned communities to Mustang Lakes. Homeowners may also contract for rear-yard maintenance separately.

See what’s going on for Mustang Lakes residents this month!

When the opportunity presented itself to purchase Twin Eagles Farms from the Folsom family for our next master planned community, now called Mustang Lakes, we seized the opportunity.  We believed we really had something special because this property is overflowing with natural beauty, lakes, rolling terrain, mature trees throughout the property – as well as the rich history of the land – it is simply as good as it gets.

A Community Rich in History

Mustang Lakes is on the site of a real Texas ranch where thoroughbred horses were bred, raised and trained. It was owned by former Dallas Mayor Bob Folsom. Known as Twin Eagles Farms, many horses went on to win significant purses at races all around the country. Notably, one horse – Reluctant Guest – was named Mare of the Year in 1989. A number of barns and paddocks still grace the property.

The land was purchased by Mr. Folsom in the mid 1980’s after the sale of his previous ranch, “La Cima” in McKinney, Texas. Twin Eagles was originally around 800 acres and included the main ranch house, indoor and outdoor riding arenas, five barns and the ranch foreman’s home.

Mustang Lakes was developed with a healthy respect for the land, an eye towards preservation, and the desire to capture the excitement of its horse racing heritage.